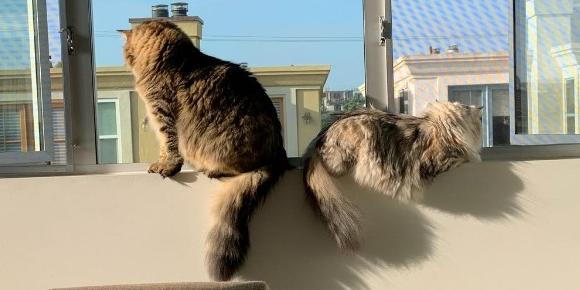 I was recently invited to film a segment on E! Pop about how to make cats get along.  Well, 4 minutes was not nearly enough time.  So here, I elaborate on some points and add others that will help bring your cats together rather than apart.

Research indicates that first impressions count when it comes to cat introductions.  If the first meeting is negative, then it is more likely the cats will have repeated conflicts.  Hence, prudence is priceless when it comes to bringing a new cat into the home.  Sometimes it takes up to one year to have a good relationship.  Here are 10 tips to help improve the chances your cats will get along and live in peace:

1.  Introduce the cats GRADUALLY.  Be patient.  Work at the pace of the slowest cat...there is usually one cat more timid, more shy, or my frightened than the other.  A good relationship takes time to develop.

2. Separate the cats before they meet face to face.  This allows the cats to begin to familiarize themselves with each other via olfactory and auditory cues before they see each other - the senses of smell and sound are extremely informative in cat communication. Each cat's space needs to include: bed, litter box, food, water, and toys.

3.  Feed the cats their meals and treats at the base of the door that separates them.  This allows the cats to associate each other with delicious food and more important, a pleasant and positive experience - even though they haven't seen each other yet.

4. After 2-3 days, switch the cats into the other's space so each cat can explore and investigate the other cat's smells safely and slowly.  Continue to feed the cats their meals and treats at the base of the door.

5.  Once the cats have spent a few days in their new spaces, in addition to feeding them, begin to encourage the cats to play together with a toy under the door via pawing.  See https://www.drjillgoldman.com/shopforcatstuff for ideas.  Play between cats is also a positive experience and should help the cats like each other.

6. After ~ one week of the absence of aggressive behavior (hissing, growling), increase the cats' visual contact by replacing the door with a temporary screen.   Baby gates are not usually viable - unless they are double and in some cases, triple stacked.  Plastic temporary fencing can also sometimes be used.  If the visual access is too much at first, dull it with a light sheet- and then gradually remove it from the bottom up.  Continue to feed and play with the cats under the divider - with the additional visual access start with the dishes farther from the divider - and GRADUALLY bring the dishes closer together.  Monitor the cats' behavior and observe all signs of aggression.  In their absence you can continue.

7.  It's time to bring the cats together without a barrier - on their own volition if possible.  Prepare the common area with plenty of hiding spaces; Some cats like high locations (perches) while others prefer low bunkers (like under the couch).  Boxes are often great inexpensive additions.  Include litter boxes food, water, and toys.  SUPERVISE the meetings.  Keep the introduction short at first, and only if the cats are amenable- GRADUALLY increase the amount of time they spend together.  Increase the likelihood of success by bringing the cats together when they are calm, such as after an exercise session or meal.  A squirt water bottle is often recommended to help break up fights - and used in case of emergency ONLY.

8.  Cats are very sensitive to punishment such as loud noises, and the added stress can result in the development and/or exacerbation of a behavior concern.  I prefer to re-direct a cat's attention onto a toy BEFORE the aggression- such as during a staring contest.  Research has indicated re-direction helps reduce aggression between cats, especially if one cat is less active than the other.  Observe the cats' behavior so that it is social and reciprocal- and not one-sided with one cat hiding and the other stalking.   If a cat is prone to over-rambunctious behavior and is used to a harness, it's not a bad idea to have them wear it with a light line during the first couple of in-cat meetings.

9.  Prepare the house hold for long term success by providing sufficient litter boxes and food/water in locations that are easily accessible and not able to be controlled by one cat over the other.  The golden rule for the number of litter boxes is: the number of cats +1.  So, if you have two cats, you need three litter boxes.  Provide the cats with lots of enrichment, such as toys to help re-direct their focus on interactive objects rather than just on each other.

10.  If the following tips do not result in harmonious co-habitation, make an appointment with a certified cat behavior professional, such as myself https://www.drjillgoldman.com/contact-us, another Certified Applied Animal Behaviorists, or a Board Certified Veterinary Behaviorist.