Why do Dogs Tilt Their Heads? 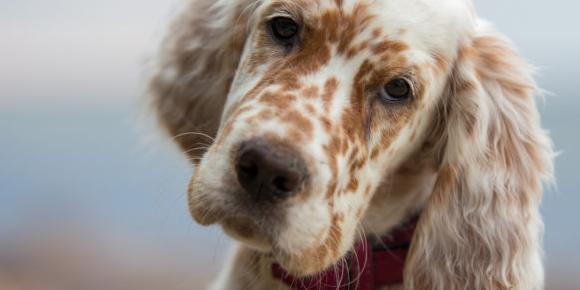 My colleague , Stephanie Gibeault, MSc, CPDT, and I had an interesting conversation about head tilting behavior in animals.  Here is the resultant article published in the American Kennel Club:

It’s irresistibly cute. A dog with a head cocked to the side makes us smile, and it’s hard not to shower him with praise, pats, or treats. But why do dogs tilt their heads? Do they know how adorable they look, or is something else going on?
According to Los Angeles-based certified applied animal behaviorist Jill Goldman, Ph.D., there might be a variety of reasons. “There is the possibility of several factors, and visual might very well be one, as well as auditory factors. So, it’s hard to say which one is the winner. But although it happens spontaneously, it most likely repeats because it’s positively reinforced.”

Head Tilting and Hearing
Perhaps head tilting, by altering the position of the ears, helps dogs better determine where a sound is coming from. Despite being able to hear an incredible range of frequencies, dogs can’t locate the source of a sound as well as humans can. However, like us, when a dog hears something, his brain can tell the difference between how long it took the sound to reach the ear farthest from the sound compared to the ear that’s closest. That difference can help localize the sound.
But most of our dog’s head tilting is done when we’re standing directly in front of him. In this case, Goldman thinks localization isn’t the goal. Instead, she thinks it’s about frequencies and inflections. The dog may be listening for the high-pitched baby talk we often use when we’re happy with our pups (did you know dogs do respond to baby talk?). “I do believe it is to get refinement on what is being said, rather than where it is coming from,” says Goldman. The dog is probably trying to gather or focus on the information.

Dog Head Tilting and Vision
Goldman also believes that vision plays a role in head tilting and suggests that research done in other species could lead us in the right direction. “They are looking at head tilting in primates, for example, common marmoset monkeys, and what they are finding is that it has a lot more to do with the visual cortex than it has to do with getting more auditory cues,” she says.
Stanley Coren, Ph.D. in psychology, also hypothesized that vision is a possible cause of head tilts. He reasoned that a dog’s muzzle might obstruct his view, so to get a better look at his owner’s face, a dog could tilt his head. His pilot study showed that dogs with more pronounced muzzles, such as Greyhounds, exhibited head-tilting behavior toward their owners more often than those with flatter faces, for example, Pugs. So, head shape and muzzle size may influence head tilting. However, more than one-half of the flat-faced dogs head tilted, so there may be more going on than simple snout issues.
Goldman thinks Coren’s research is a great start, but points out that there could be more factors involved than just snout length. In the primate research, the visual acuity of the animal at certain ages seems to be related to head tilting. So, Goldman thinks looking at head tilting over a dog’s lifetime could be informative. “Are we seeing more in puppies when their eyes are not fully developed? Or maybe when dogs become geriatric, and their vision (and hearing) starts declining, we see a re-emergence.”

Positively Reinforcing Head Tilting
Goldman believes that we can influence head tilting by how we interact with our dogs. “I think it might happen more often in certain dogs than others because it’s reinforced. I believe it is usually followed by a positive event, like ‘Do you want a cookie?’ or ‘Do you want a walk?’ or ‘Do you want to go in the car?’ and things of that nature. I don’t think most people say, ‘Do you want to go to the vet?’” The cookie, walk, or car ride that comes next is rewarding for the dog. And because dogs repeat behaviors that are rewarded, our positive reaction can increase the frequency of head tilting.
Even if you love your dog’s head tilting enough to train him to do it on cue, there are still times when a head tilt is a cause for concern rather than cookies. Goldman warns, “If you see a persistent head tilt, and it seems not to be related to anything, go straight to your veterinarian.” Persistent or continuous head tilting can be related to many different and potentially serious health concerns, such as an ear infection or a vestibular issue.

More Research Is Needed
This fascinating and heartwarming canine behavior may not be as simple as it seems. Goldman explains that because vision, hearing, and learning may all be involved and even work together, “more research needs to be done to tease out what exactly is going on.” In particular, she wonders what happens when we’re not in the room. “How often does it happen when we don’t see it? Does it ever happen without an auditory cue? And do dogs do it to one another?”
No matter why dogs tilt their heads, it provides a way for humans and dogs to bond. After all, we’ve been known to head tilt, too. Goldman imagines a dog begging on a street corner in a third-world country. What if he gives a head tilt? “I think it would probably benefit him,” she says. “It would be adaptive because it’s something we have in common. The human relates to him.” And that’s good for both of us.